Alma and Clyde, my mother’s parents

For the past eight years or so, we have been cooking Thanksgiving dinner at our house, as opposed to going to other people’s houses to eat their food. Once I turned forty I figured I needed to at least know how to cook turkey and all of the trimmings for the traditional holiday meal.

When I was young, Thanksgiving and Christmas dinners were great. After nagging all day as to when the food would be ready, we sat down at the kid’s table and thoroughly enjoyed filling our appetites, without an ounce of responsibility. Those were the days!

Those moments in life where you realize that you are now the adult in your house are kind of sad, in a way. The carefree days of watching other people fret come to an end. During the holidays, you are now the mom (or dad), Santa Claus, Mrs.Claus, the head elf, the chief cook and bottle washer, and matriarch of the holidays. It can feel as though everyone’s Thanksgiving and Christmas is either made or broken by your actions, and unfortunately, it is in many ways.

In The South, we eat turkey and dressing for both Thanksgiving and Christmas. If you are a beginning holiday cook, at least you can kill two birds with one stone by mastering a single meal. Nowadays you don’t even have to call your older female relatives and ask them embarrassing questions like, “What is a giblet?” The Internet will tell you everything you need to know (and more).

The pressure of preparing our first real Thanksgiving dinner was scary. Trying to fill the big shoes of all the previous cooks in the family was not easy. My mother, my husband’s mother and both of our grandmothers had been homemakers for most of their lives. They spent decades cooking and canning, and doing things I have no clue about in this modern world we live. But everyone has to start somewhere, right?

I chose to prepare favorite dishes from all the patriarchs and matriarchs. We loved Rita’s Watergate salad (why is it named Watergate salad anyway?), Dagga’s sweet potato casserole, and Grandma Stella’s cranberry salad. I also attempted Butch’s cornbread dressing that year, and for the next six years as well, but didn’t get it right until last month. The second year we started frying half of the dressing, the way my mom did, probably to compensate for the failure of the baked dressing. They are both great, and can be made from the same basic dressing recipe, so we will probably continue to prepare both of them.

Every year the timing is challenging when it comes to making the mashed potatoes and giblet gravy. They are generally prepared while the turkey rests. In our family’s case, the dressing is also being fried at this time, and we probably still need to heat up the rolls and put the rest of the food on the table. Volunteers are recruited (begged) to pitch in and pull it all together, because all of the anticipation and holiday pressure inside of me usually boil over during the last 30 minutes of the preparation. By this time the greasy dishes are piling up, there is no space to do anything in the kitchen, and everyone is starving. It’s actually kind of exciting. Caterers must feel that excitement before all of their big shindigs.

I wouldn’t trade the privilege of preparing food with my family for anything in this world. I love thinking about how many holiday feasts my grandmas’ made in their lifetimes, and hope to make many in my own lifetime.

There are still Thanksgiving family recipes that we haven’t tried yet, like Faye’s rolls. They have to rise and double, and whatever else they do. The thought of adding something that requires yeast seems overwhelming though, so we just buy the rolls for now. We don’t make pumpkin or pecan pie because Grandpa and Memaw bring the desserts, along with a ham. Maybe someday we can make cookies or peppermint bark, or something else amazing.

The one new thing we added this year was the green bean casserole with the French onions. I have always loved it, even though I don’t think it has been a regular at any of the past family dinners. Maybe someday my girls will want to make the same green bean casserole when they become the matriarchs of their own holiday meals. 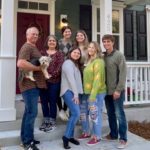