When my oldest daughter was young (she is 25 years old now), I did not let her watch the movie, Coraline. The button eyes were creepy to me. By the time my 3rd child came along (she’s 18 years old now), I had relaxed a bit. For the first time, I saw the movie after we rented it from a video store in town. Since then, I’ve seen the movie several times, and read the book. It could be too scary for young children, and there are some inappropriate sisters that live in The Pink Palace Apartments! However, it is a beautiful story about a girl, Coraline, who is discontent with her distracted parents. The “Other Mother” takes advantage of Coraline by offering her everything she doesn’t have at home. The book is even better than the movie. If your daughters loved the book or the movie, they’ll love my Coraline and Her Other Mother Halloween Costumes.

Making the sister costumes was so much fun! We shopped all the thrift stores in town for Coraline’s raincoat, boots, and turtleneck. We bought a green pair of “swampers,” and spray painted them yellow. The boots felt tacky after we painted them, and never really dried. That’s okay though, they only cost $5 at Goodwill. I finished off my youngest daughter’s costume with a dragonfly hair clip and a button key necklace. Details make or break costumes, in my opinion.

Next, we straightened “Coraline’s” hair, and sprayed it with two cans of blue hair spray paint. Get 3 cans! Two blue cans did not provide enough color to please me, but we had to go and didn’t have time to purchase another can.

The Other Mother’s Costume

The Other Mother wore several neat outfits in the movie, Coraline. My 14 year-old daughter chose the most comfortable one, which consisted of black leggings (she actually wears capri pants in the movie) and a turtle neck. The off-white turtle neck was easy to find at our local Goodwill, and we already had black leggings. We bought a pair of clear glasses from Dollar Tree and glued big buttons on the front. I ordered the big buttons from Michaels Craft Store. I usually start thinking about costumes in early October, so that ordering supplies and finding thrift store stuff is fun, rather than stressful.

We straightened the “Other Mother’s” hair, and used black hair spray for her hairdo. The black spray covers very well. We only needed one can, but used two to cover it extra-well.

I hope you enjoyed my Coraline and Her Other Mother Halloween Costumes! 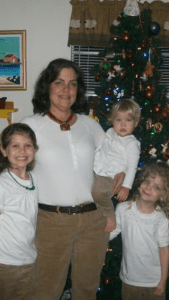