Tired of doing things the same way as everyone else? Learn to write, create, and decorate without fear.

Success is the ability to move from one failure to another without loss of enthusiasm.

This quote has been attributed to both Winston Churchill and Abraham Lincoln. It’s an encouraging thing to remember when school projects fail. Our Ill-Fated Iroquois Gumdrop Longhouse Project was tragic, but kind of funny, and memorable nonetheless.

As part of our America the Beautiful History curriculum, we made an Iroquois Longhouse with gumdrops and toothpicks. After standing as our table centerpiece for under five minutes, it completely collapsed. It reminded me of the time we tried to pull taffy while doing a Little House On the Prairie unit study.

Before I get into the tragedy of it all, let me explain exactly what an Iroquois Longhouse is:

An Iroquois Longhouse was a long dwelling, designed to house as many as 20 families. There were doors at both ends, and holes in the roof to release the smoke from individual family fires. They were made with bent saplings, and covered with animal skins in the winter for warmth.

What’s interesting to me, is that other early cultures built longhouses too. Not only were longhouses used in Asia, but by the Vikings as well. The Viking longhouses had thatched roofs, walls of waffle and daub, and were around 250 feet long. I like the idea of groups of families living communally for protection and companionship. Sometimes I think today’s independent mindset creates an environment of loneliness.

There weren’t very many directions. The goal, it seemed, was to work together and problem-solve. My first failure was not following the instructions for the length and width. Instead of making it 12 toothpicks long and 5 toothpicks wide, I wanted it to be shorter and skinnier (6 toothpicks long; 4 toothpicks wide), so that it could fit comfortably -in the center of the table- on my Pioneer Woman cutting board. It seemed like a good idea at the time, but ultimately left the building without a proper center for the roof. The 4 toothpick width did not allow for a “center” like the 5 toothpick width would have. So, the roof wasn’t really peaked, or supported properly.

We began with the base. Our longhouse was 4 toothpicks wide, and 6 toothpicks long.

We left openings for the doors at both ends, but had to make “French doors,” because of my modifications in width. Otherwise, the door caved inward.

Things began to look really bleak once we began the roof construction. Narrowing the width took away the ability to properly peak the roof. The sides ultimately collapsed because they could not bear the weight of the ill-constructed roof.

We rolled up five sheets of white paper tightly, and taped them shut. These were to fit snuggly under the roof, and have smoke-stack cotton balls coming out of the openings. That part worked well, but not well enough to support our faulty construction.

While I was cooking dinner, the building kept leaning to one side or the other. I kept adjusting it, and pushing the toothpicks further into the gumdrops in a desperate act to fortify the structure. The last time I went back to look, it was in a heap and could not be fixed. I threw the whole thing away with a sigh. Luckily, I was able to laugh about it, and feel proud that we’re doing the suggested projects in the textbook. In my younger days, I might not have taken the collapse of the Iroquois Longhouse so well. These days my motto is like Doris Day’s song, Que Sera Sera. Whatever will be, will be. Posts Were Featured Here in May: Be Kind Watering Can 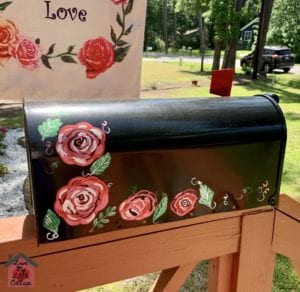